In the spring of my junior year of high school, I had gotten interested in 3-dimensional graphics and how your computer rendered them to your screen. I decided that I would make a project that used 3D graphics techniques in order to render a 3D planet in real time. This project, written in Java using LibGDX to provide me access to OpenGL functions, started off with me simply drawing a 3D cube to the screen and then being able to rotate the camera around it. After I completed this relatively easy task, I set on to replace the cube with a planet. 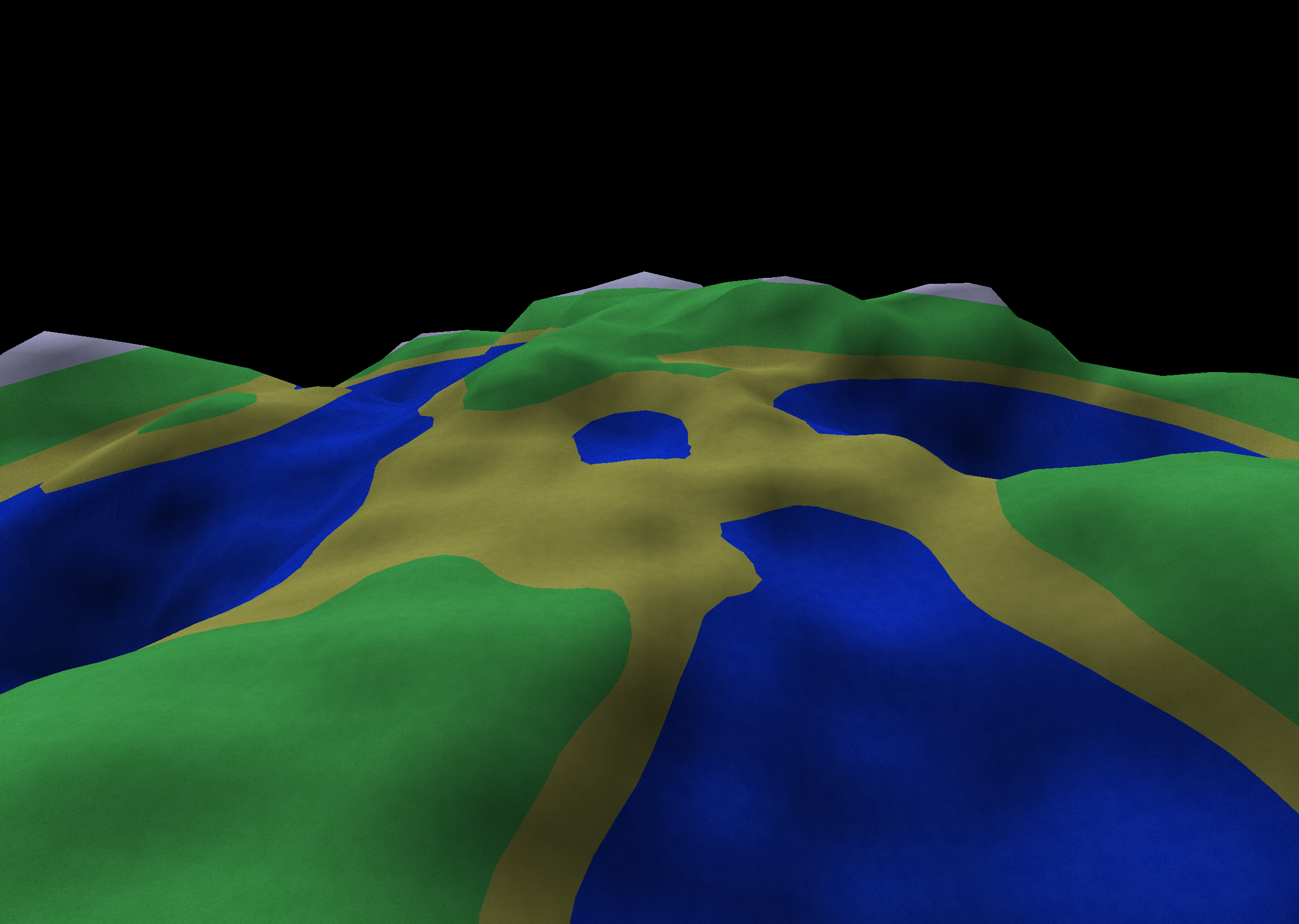 A screenshot of the rendering produced by the planet renderer program. As you can see the mountains in the background are much more jagged than the terrain closer to the view. The colors are set from the height of the terrain.

First I cut up each face of the cube into smaller subfaces. Each of the six faces on my cube was cut into five hundred and twelve columns and each of those columns into another five hundred and twelve rows. This left me with nearly one and a half million squares collectively making up a cube. I then took all of the vertices from these squares and I moved them inwards so that they were all an equal distance away from the center of the cube. I had made a sphere. However, the points on this sphere were more uniformly distributed than those on a sphere where an equal amount of points were placed at every latitude. I then gave each point a unique random offset generated by an open source version of the simplex noise function. This gave my sphere bumps and edges. I then colored points offset towards the center blue and those offset away green. I had made a planet (of sorts), but it did not meet my expectations. It would take my program approximately a minute to generate all of the points and send them to my GPU in order to render a much lower quality version of the planet than I had hoped to make while running slower than real-time. 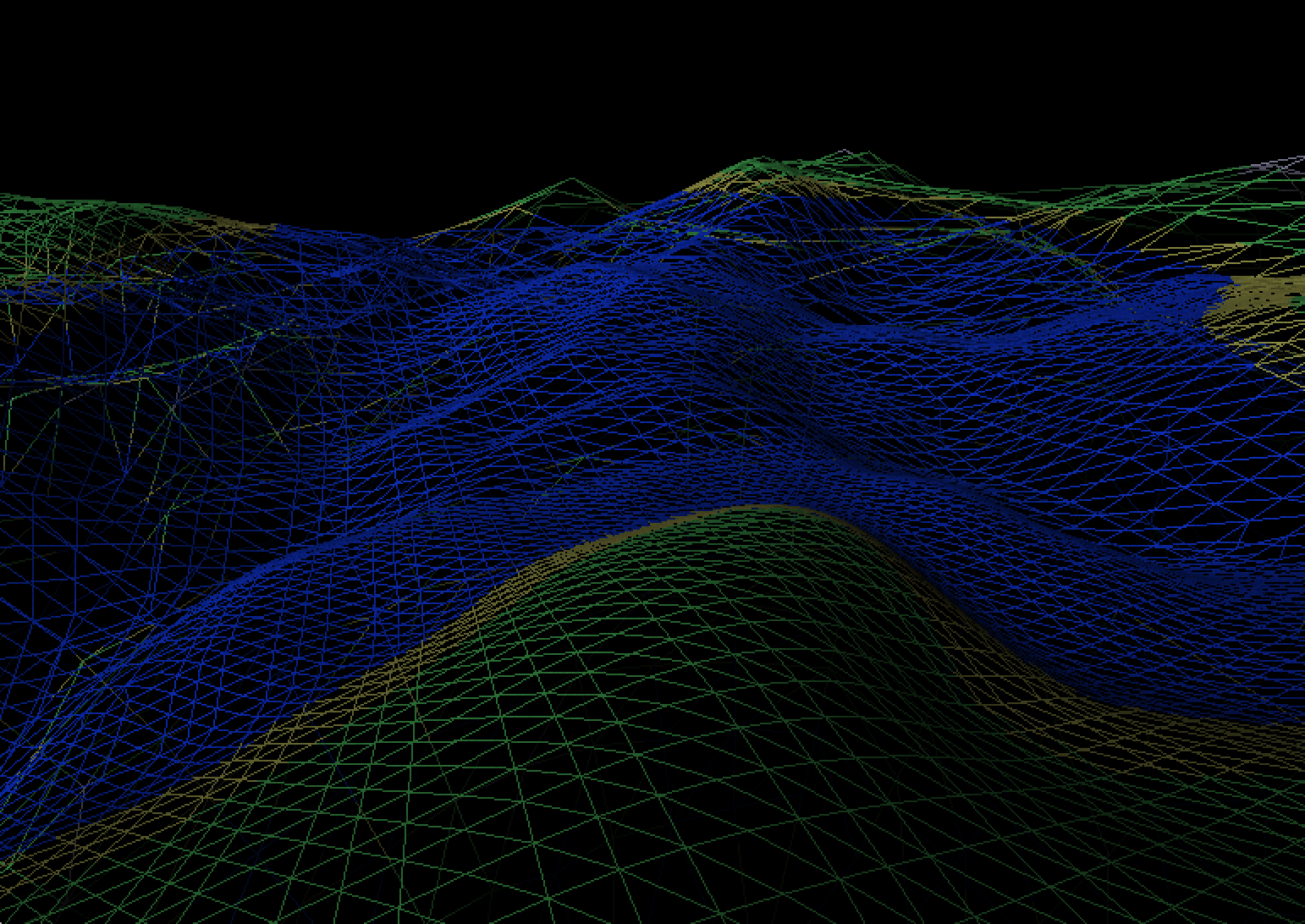 A screenshot of the rendering produced by the planet renderer program with wireframe mode turned on. With this it is visible how the land in the background has less triangles than the land in the foreground. The transitions between different levels of detail are also visible.

I realized that I needed to change something big if I wanted different results. A couple academic research papers later, I realized what I needed to do. I needed to implement a level of detail algorithm. This algorithm would change the amount of points that it was using to render the planet as it was rendering the planet to simultaneously offer greatly improved performance and greatly improved quality. After figuring how these algorithms worked in general and failing to understand any specifics about any algorithm, I set on to devise my own. About a week later I had succeeded. I wrote a quad tree that would wrap correctly around the edges of my cube. Then I would take these nodes that the quad tree gave me and I would connect their edges up with triangles in order to generate the mesh that I used for rendering. Then I was able to split one of these nodes if I wanted a region of the planet to be in higher quality or recombine four child nodes back into a parent node if I wanted to increase the performance. After this was completed, I had achieved much better performance and quality than I originally had with the first version of my planet. I was able to zoom in all the way into the planet and I still would not be able to discern massive triangles in my planet. However, it still didn't work as well as I had hoped, but I learned a lot from it and the academic papers that I had read finally clicked after I had finished the project.